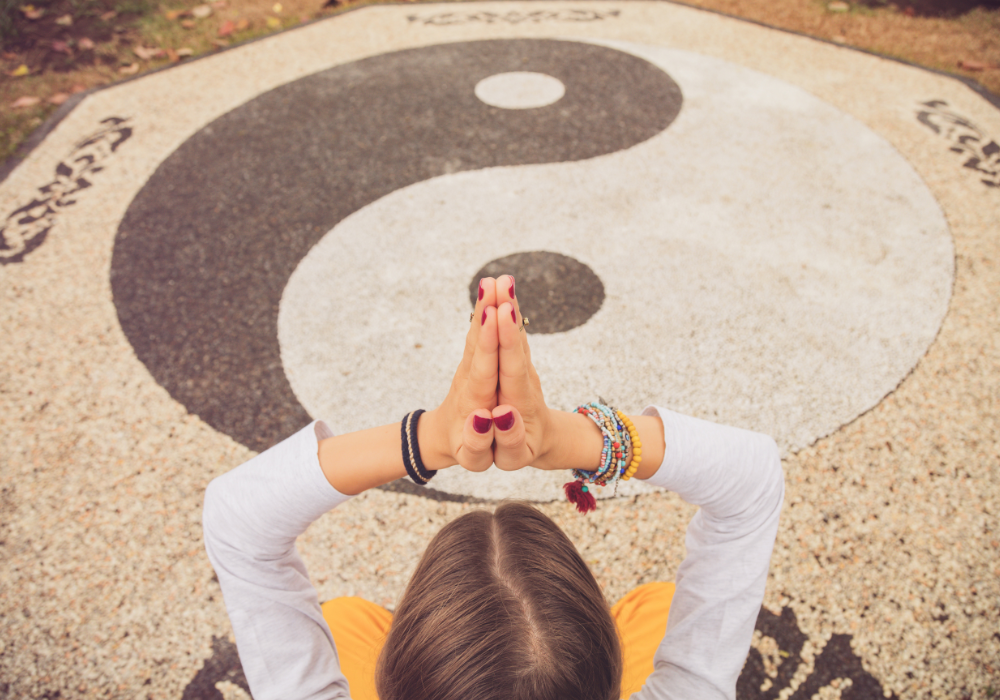 Human development has always been dependent on healing.

The historical record is filled with healing symbols from various religions and cultures.

To that end, we’re looking at 25 symbols of healing from around the world.

Some cultures traditionally used them to mark the location of a healer or doctor; others are still used today as meditation aids and healing talismans.

What Are Spiritual Healing Symbols and How Are They Used?

In a definitional sense, a healing symbol is a pictogram or graphical character used to promote mental wellbeing, spiritual balance, or physical health.

Since prehistoric times, humans have used healing pictograms both practically and spiritually.

Local healers etched healing symbols into rocks or trees near their residences.

By the middle ages, doctors, apothecaries, and natural practitioners were using graphics in shop signs and promotional materials — a practice that remains common today.

In many traditions, spiritual symbols are thought to hold supernatural, energetic, or vibrational powers, and people use them to enhance spiritual and physical healing. Common ways to incorporate healing symbols include:

25 Healing Spiritual Symbols and Their Meanings

Are you looking for spiritual symbols to use in healing rituals or meditations? Or maybe you’re interested in spiritual artwork or tattoo ideas.

We hope our list of 25 spiritual healing symbols is a source of inspiration that sparks a few ideas.

1. Snake Coiled Around a Staff

For centuries, a snake coiled around a staff has been a symbol of healing. It was originally associated with the Greek god of medicine, Asklepios (aka Asclepius).

Over the centuries, Asklepios’s rod transformed into the caduceus, the universal symbol for treatment featuring two snakes coiled around a staff with two wings.

The Anasazi peoples first used the spiral sun in petroglyphs, and several First Nations call it “The First Healer.” In fact, many shamanic belief systems see the sun as a natural healing entity.

The spiral represents eternity, and the rays symbolize the Universe’s movements and rhythms.

The spiral sun is thought to help people heal from physical and spiritual difficulties by connecting them with the ideal vibrations.

Many cultures associated snakes with healing, protection, and health — including the ancient Egyptians. In their mythology, Wadjet, a high-ranking protection goddess, was represented as a woman with the head of a cobra.

These days, serpents have a mixed reputation, but they’re still symbols of good health and fortune in many traditions.

Sei He Ki is one of the most significant and oldest Reiki symbols. It’s used to promote the unity between God and man and spiritual equilibrium.

People may meditate in front of the sign when wanting to balance their mental and physical health or connect with the universal life force.

“Abracadabra” is more than just a word co-opted by magicians. Historically, the phrase was associated with healing remedies.

It’s believed to derive from the Hebrew initials for “father, son, and the holy spirit,” and in that language, it means “I will create as I speak.” In Aramaic, it translates to “I create like the word.”

Whichever the case, healers told patients to wear amulets of the saying, with the word diminishing by one letter per line to form a triangle.

Cho Ku Rei is another Reiki symbol associated with healing. It enhances the power of a healing ritual, especially for physical ailments.

Many people carry around a Cho Ku Rei amulet or get a tattoo as protection against physical mishaps.

A symbol of a spiral inside of a palm is known as a shaman’s hand, Hopi healing hand, or just a healing hand, and it comes from traditions established by First Nations peoples of the southwestern United States.

The spiral palm represents the universe, and the hand passes on protective and positive energy. Some folks believe it attracts good luck, wealth, and happiness; others use it as a therapeutic aid.

Humans’ ability to harness fire was seminal in our evolutionary development.

One of nature’s most powerful forces, it represents universal energy in that it has the power to both create and destroy. Fire was the catalyst for civilization; likewise, it has sparked countless travesties over the centuries.

Hon Sha Ze Sho Nen is the Reiki symbol for long-distance healing. It allows practitioners to send positive energies through time and space.

The symbol means: There is no past, no present, no future. The past, present, and future are here now. The Divinity in me salutes the Divinity in you.

Mainly, it’s used in meditations to help you release past traumas.

Evidence of the first yin-yang symbol — aka the Taichi symbol — dates back to 1400 B.C. Originally associated with Taoism, the yin-yang symbol represents harmonic equilibrium at its most basic level.

However, it also symbolizes the idea of contrary forces interconnecting, complementing, and giving rise to one another. In some traditions, the Taichi is a reminder that universal energy creates order out of chaos.

Prema Agni is a Buddhist symbol usually drawn on one’s back. It helps open your sacred heart.

In some schools of thought, people who wear Prema Agni amulets or tattoos get and give love much easier. It’s also associated with healing a wounded heart or spirit.

The symbol has seven primary points that stand for:

Lotus are special because they must rise through the mud to become beautiful flowers. Their journey is one of struggle and purification.

They’re regarded as a natural and powerful symbol of rebirth and perseverance. Using lotus imagery during meditation can go a long way in healing hardships.

13 Ways to Not Let Things Bother You

11 Of The Best Books For Spiritual Awakening

Sri Yantra is a pictorial image of interlinked triangles with a perfect Pi (3.14) ratio. It’s revered as the “ultimate fractal of healing” and the graphical representation of the “OM” (aka “AUM”) sound.

Tradition holds that it popped into the head of a yogi who lived over 5,000 years ago as a symbol to help heal the heart and mind.

The Eye of Horus is an ancient Egyptian emblem. It represents protection, restoration, and health. The symbol is associated with the story of Seth, the God of Chaos, who took Horus’ left eye.

As the story goes, Horus’ eye was miraculously repaired and became a protective talisman from that point on.

The rising phoenix is a mythical symbol that’s meaningful to many people who’ve emerged stronger from a struggle. With their vibrant feathers, phoenixes are said to live up to 1,000 years.

At death, they burn up in flames, and a baby phoenix is born from the ashes. As such, it represents healing, rebirth, and starting over.

A polished onyx has long been considered a protective charm in Indian and Persian traditions.

Many people have onyx jewelry, and others carry a small chunk of the stone in their pocket or purse to shield them from danger and misfortune. Some folks also believe it enhances courage and spiritual wisdom.

The dove officially became the international symbol of peace in 1949 when delegates of the World Peace Congress chose the bird as the assembly’s mascot.

But for thousands of years prior, it served as a symbol for rebirth and regeneration in many cultures.

Alternatively known as a sacred hoop, medicine wheels are a part of several Native American belief systems. A typical medicine wheel is a circle divided into four sections.

It can represent elements of nature, stages of life, seasons, or animals and plants, depending on the ceremony, ritual, or healing practice. Medicine wheels can be drawn, crafted, or worn as a pendant.

“Om” is a sacred sound in Buddhist and Hindu belief systems. It represents the soul and voice of the Universe and is frequently used to initiate meditations, rituals, incantations, and prayer sessions.

Most people recite the sound while in the presence of the Om symbol, as it enhances emotional concentration and healing. To state it another way, Om helps to erode negative energy.

In Sanskrit, the word “chakra” means “disk” or “wheel” and refers to the energy centers in your body. These wheels or disks of spinning energy each correspond to specific nerve bundles and major organs.

Your chakras need to stay open or balanced to function at their best.

Although some schools of thought identify hundreds of chakras, there are seven main ones. They start at the base of your spine and extend to the crown of your head. Each has an associated symbol.

Yemaya is an important orisha — or spirit — in the Yoruba religion prominent in several western African countries.

She is linked to the moon and cleanses away sorrow. Yemaya is motherly, strong, and protective, making her a supreme healer in the tradition.

Some plants, like aloe vera and various herbs, have proven palliative properties. Throughout human existence, trees and plants have represented growth and regeneration — two concepts intimately connected to healing.

An ancient Celtic symbol, the triskele spiral comprises three connected coils. It speaks to the belief that everything happens in batches of three (i.e., “third times the charm”).

The spirals can represent various things, including land, sea, and sky; sun, gods, and human; birth, death, and rebirth.

Muslims call it the Hand of Fatima; Jewish people refer to it as the Hand of Miriam; plus, it’s an important symbol in certain Indian and Buddhist traditions, too.

Regardless of the name, it serves the same purpose in all cultures: protecting wearers against the evil eye or illness.

Raku is also known as “the completion symbol” in Reiki and is used during the final healing stages. Some refer to it as the “fire serpent” and use it to seal bodily energy. The Raku symbol and associated wavelength are effective at healing small areas.

If you’re searching for a symbol for healing, we hope you found this list useful. May you use them in good health — both mental and physical.