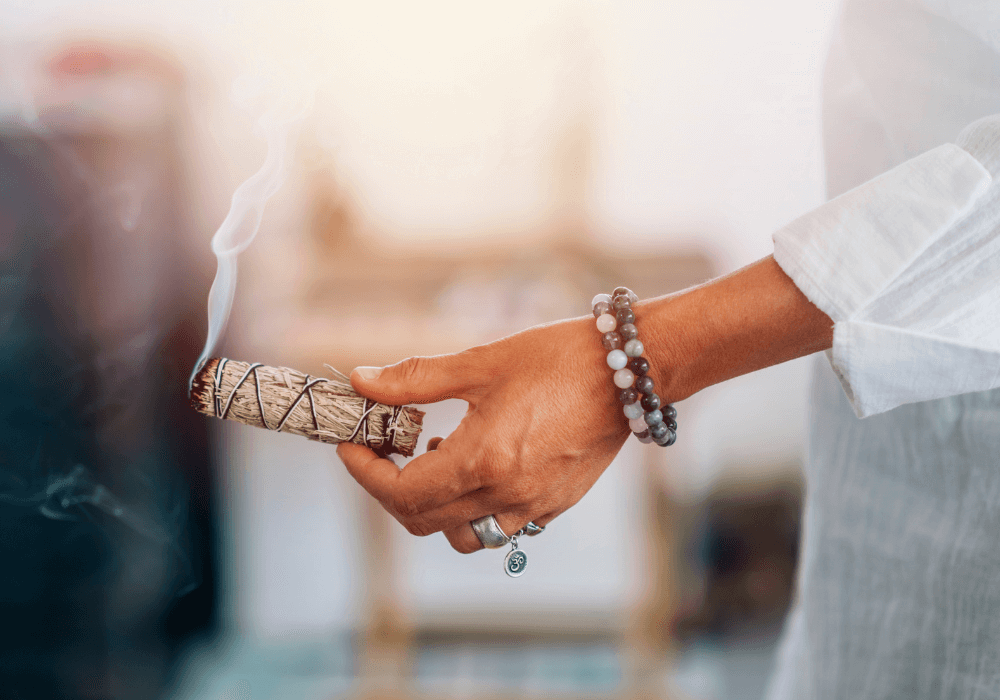 Here’s an undeniable fact: the Universe and everything in it wouldn’t exist if not for energy — including us.

So it logically follows that energy, the foundation of existence, affects how we feel, behave, think, and sleep — which raises a probing question: Is it possible to control the energy in and around us?

And one of the best ways to start is by doing an energetic scrubbing of your abode — aka a house cleansing.

What’s In This Article?

What Is House Cleansing?

Your home — whether a van or mansion — should be your sanctuary. It’s where you get to be you and hang loose. It’s a safe space, your lair, your castle.

When negative, hostile, and reckless energy invites itself over and settles in, your home can feel unsettling, suffocating, and out of focus.

As a result, you become irritated, which can trigger a downward spiral.

So how do you exile the unwanted vibes? Do a house cleansing. You don’t necessarily need a reason to do one, but it’s wise after:

What Are the Benefits of Cleansing a House

Every element on Earth was made manifest by an energetic reaction.

So when vibes short circuit, your essence can become…a little bit funky (and not in a good way). You’re crabbier, hungrier, and generally off your game.

In other words, when you’re snapping at your cat for lovingly saying hi, first, you should be begging for Fluffy’s forgiveness (you know how they get!) — and it’s also probably time for an energetic cleanse.

Ridding your home of negative energy has impressive benefits.

Clearing other people’s energies — (which have nothing to do with you) — can be a monthly ritual to keep your domestic vibes balanced and optimal.

It’s always wise to cleanse a new home — whether it’s brand new or just new to you. In both instances, the goal is to start on the right energetic foot.

But how do you know it’s time to cleanse after living somewhere for a while?

Cleanse Your Home Of Negative Energy With These 11 Cleansing Rituals

How do you work with cleansing energy? Let’s look at 11 tools and techniques that get the job done.

Intense cleaning can be exceptionally satisfying, plus it’s good exercise.

So slip into some cleaning clothes and whip out that elbow grease.

Abolish all cobwebs, wipe down the baseboards, dust the blinds, and run everything that can be run through the wash through it! Tend to every nook and cranny — and leave vacuuming to the very end.

During your superclean, get rid of broken items. If you can fix it, do so. If it’s irreparable, make peace with its passing and get rid of it.

Remember, nothing is permanent. Embrace the change. After all, you’re freeing up space for better energy in your life.

When cleaning for an energetic house cleansing, you may want to strategize.

For example, do you want to start cleaning in the middle of the house and work your way out, pushing out unwanted energy?

Or perhaps hyper-focusing on the windows and doorways — the most trafficked energetic exchange spots in a home — is the way to go.

Review cleaning methods and choose a style that fits your goals, personality, and living arrangements.

3. Do a Smudging Ceremony

Are you wondering how to cleanse your room with incense? Rooted in First Nations’ traditions, smudging is the process of removing bad energy from a space via various herb-burning techniques.

The most well-known is a sage cleansing session wherein you swirl the sage smoke around the space, inviting certain energies to exit and others to enter.

Start in the center of the kitchen and walk clockwise around each room while brandishing the burning sage stick.

Feel free to say affirmations or other verbalizations.

If you’re not a fan of sage’s scent, substitute either frankincense or copal.

Some people sprinkle salt in the corners after a smudging ritual and let it sit for 48 hours before vacuuming it up. Be careful, however, if you share a home with pets.

Have you ever given crystals a try? It’s too far out for some people, but folks often change their minds after a month or two of living with crystals.

Besides, gems are Mother Nature’s jewels — and they look great regardless.

What crystals and rock formations are best for house cleansings?

Enhance Your Intuition With These 99 Third Eye Chakra Affirmations

25 Healing Spiritual Symbols And What They Mean

An energetic cleansing standard in South America, Agua de Florida is a mixture of citrus, lavender, clove, and other herbal extracts.

According to legend, it was first discovered and named by Juan Ponce de Leon, the explorer, in the 1500s.

Some people make their own agua de Florida; others buy it. However you acquire some, add a dash to your cleaning products for an energetic boost. (It also smells super.)

6. Communicate With Your Home

If you want to cleanse a home of negative energy, don’t be afraid to communicate with your house, apartment, or condo.

Ask it to help push unneeded energy out and welcome helpful vibes in. And don’t forget to thank it for everything it does for you, like providing warmth, safety, and shelter.

It may sound a bit out there, but just verbalizing your gratitude and wish to be rid of negative energy will uplift you and foster a positive mindset.

Oh! And don’t neglect the plants. They need a little love and affection, too.

Fundamentally, negative energy is cowardly, lacks maturity, and is terrified of loud sounds. So turn up the volume! Try not to annoy your neighbors, but a reasonable level should do the trick.

Clapping and drumming lousy energy out of a room also works, as does ringing bells.

After all, the more things you have lying around, collecting dust, the more burrowing opportunities you’re creating for less-than-ideal energy and vibes.

Don’t just throw stuff in a room, close the door, and call it a day. Get in there and clean out the clutter, too! Gut the basement and sort through your closets. When working, open up windows to encourage an air and energy exchange.

Give your home the full “Marie Kondo” treatment for your own life-changing magic.

Have you heard of halotherapy? It’s been around for millennia and was first popularized by Polish spas in 12th-century Poland.

Today, the best salt lamps are made using crystals from the Himalaya Mountains. Believers say the lamp’s negative ions naturally detoxify the air.

And even if you don’t think they have an energetic effect, Himalayan salt lamps look great.

Is your furniture set up ideally for the best possible flow and luck?

If you’re unsure, consult some Feng Shui websites, videos, and books. The four main rules are:

Host a welcoming party. It can be a solo celebration where you greet the new energy and bond. Or, you can invite a handful of dear friends who will raise the vibrational plane of your home.

Throwing a big blow-out with dozens of people typically isn’t a great idea because you have less control over the energy being brought into the space.

Take six seconds and think about the rush of dopamine that swooshes through your body after a satisfying cleaning session.

Everything looks, feels, and smells perfect — and you stand in the middle of the room low-key, wondering why Conde Nast isn’t beating down your door.

Tripling that sensation is what energetically cleansing your home feels like.

And when you finish, why not pamper yourself with an at-home spa day? Or maybe a reality show binge is more up your alley. Whichever you choose, enjoy and soak up all that positive energy.