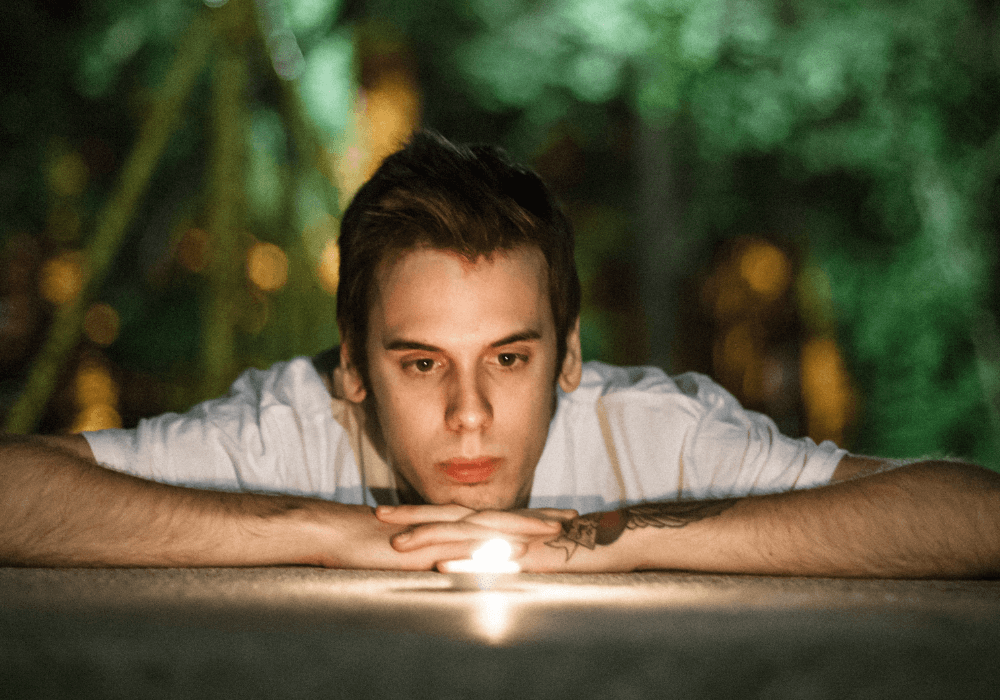 People worldwide practice dozens of types, from mindful to analytical to trataka.

Today, we’re talking about the last one.

Trataka yogic eye exercises have been around for thousands of years and involve intently focusing on a single object.

Trataka means “to gaze steadily” in Sanskrit, and it’s one of the most effective meditation styles for people raised in a western tradition.

Get comfy, and let’s do a deep dive.

What Is Trataka Meditation and What Is Its Purpose?

An ancient meditation technique in yogic, Zen, and Tibetan Buddhism traditions, trataka is an effective meditation method for cultivating focus.

Spiritually, it brings energy to the third eye and is used as a mind purification tool.

When doing an internal session, it’s up to the person whether to close or open their eyes.

External trataka is always open-eyed, and the practitioner focuses on a single thing, which we’ll explain more in-depth below.

Why is trataka meditation so popular?

Why is it one of the more accessible forms of meditation?

It’s all about the eye. Sight is a powerful sense. In fact, 80% of sensory data comes through vision. Resultantly, ocular meditations can feel more impactful than other types.

What Happens During Trataka Meditation?

Scientists have a good understanding of why trataka meditation works so well, and as we mentioned above, the eyes play a central role.

Before we dive into the nuts and bolts of why trataka works so well, let’s review a few facts about how vision works.

Why is the eye in constant motion?

It’s the body’s way of avoiding Traxler’s Phenomenon — an anomaly in which people cease to perceive things we stare at for too long.

Focusing intently on one thing is an excellent exercise for your ocular nerves and stimulates associated brain parts, which improves focus and concentration.

Furthermore, trataka is an eye muscle exercise. It helps you control your blink rate, stimulates the pineal gland between your eyes, and balances your third eye chakra.

A Note About EMDR

EMDR stands for eye movement desensitization and reprocessing. Sanctioned by the US Department of Veterans and World Health Organization as a PTSD treatment, EMDR is said to be more productive than Prozac.

Have you ever worked yourself into a tizzy and breathed deeply to calm down? It’s ubiquitous.

But did you know it works in reverse, too? In other words, how you breathe and use your eyes directly impacts your emotional health. So, practicing breathing and eye exercises when you’re already calm can take your stress level even lower.

The basic formula is simple: a still eye equals a still mind.

What Are the Benefits of Doing Trataka?

The benefits of trataka aren’t just anecdotal. Over the past several decades, researchers have studied the effects of meditation on humans, and the results have been undeniable: meditating does a brain and body good.

Generally speaking, scientists and academics have proven that after a month of sustained practice, meditation reduces stress, anxiety, and low-grade depression. Meditation also gives memory, awareness, and discipline a boost.

Interestingly, doing trataka helps some people reduce peripheral distractions caused by outside stimuli. For example, let’s say you live next to a fire station, and every hour alarms go off, pulling your attention away from work.

People who engage in trataka can better block out the commotion and continue concentrating on their immediate priority.

In one study, mature female participants showed improved cognitive function and short-term and working memory. Plus, they demonstrated a sustained ability to focus longer.

Experience More Calm And Inner Peace When You Meditate With Amethyst

Find Your Peaceful Center With These 11 Centering Activities

How to Practice Trataka Meditation

We’ve reviewed the whats and whys; now, let’s jump into the hows.

1. Prepping for the Experience

As is the case with any meditation practice, step one is prepping for the experience — which can be as simple as sitting quietly for 30 seconds and taking a deep breath or setting up a dedicated shrine and meditation room.

One thing unique to trataka, however, is the lighting. If you’re doing a candle gazing meditation, you should dim other lights low (or turn them off completely). If you’re alone, put the additional, soft light behind you.

2. What Can You Focus On When Doing Trataka Meditation?

The sky’s the limit when picking a trataka meditation focal point.

Most people start with a candle flame. Perhaps the phenomenon is a remnant of our primitive heritage embedded in our DNA.

Humans are easily mesmerized by fire, and nearly everybody finds staring at a single flame calming and engrossing.

But candles aren’t the only option for external trataka meditation. Other options include:

You can even focus on the tip of your nose! If you gaze at a picture or painting, pick one spot. The goal is to practice one-pointedness.

Whatever object you choose, place it at eye level between two and three feet in front of you. Wear your glasses if needed.

3. How Do You Do Trataka Meditation?

As we’ve already mentioned, many people find trataka meditation one of the easier mindfulness exercises to master. So how do you do it?

Advanced practitioners may add breathing and affirmation work at the end to “seal the spiritual deal.”

When you’ve completed the cycle a few times, your eyes will probably tell you they’ve had enough. Listen to them.

Then, gently wash your face with cold water, and voila! You’ll likely feel more centered and calmer after just one session.

Don’t get upset if you can’t last long at first. Some people only make it three seconds. That’s perfectly OK! You’ll improve. Also, if you blink, it’s not the end of the world.

What to Watch Out for with Trataka Gazing Meditation

Trataka meditation is excellent. However, you should understand a few things before starting.

If you approach the practice sensibly and heed the warnings, trataka meditation can be an effective tool to add to your wellness and mental health routines. Don’t be afraid to make the practice yours. Tweak as needed.