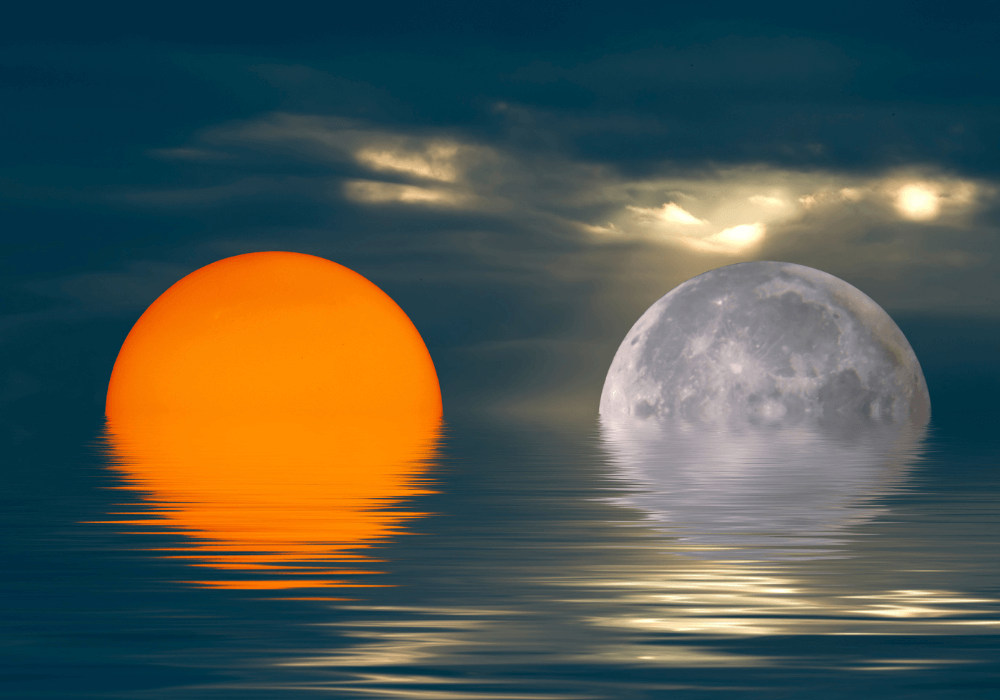 The Universe is a mashup of opposing forces working together in support of existence.

The concept is known as duality, and it’s played a profound role in the development of spiritual, cultural, and religious thought across all spectrums since the earliest times.

Every society, past and present, has acknowledged the abstraction in one way or another.

Resultantly, duality symbolism is presented in many ways — and that’s what we’re exploring below.

What Does Duality Mean?

Duality, which notably includes the word duel, refers to the quality or state of having two opposing parts or elements.

Contextually, dualistic forces are usually seen as working in tandem to support one another. Common examples include:

Essentially, dualities are dichotomies or two sides of the proverbial coin.

In this light, dualism refers to two types of reality: pure awareness, which is unchanging and immaterial, and nature, which includes the mind, body, and senses.

In physics, the word is used to describe the property of matter and electromagnetic radiation in relation to wave-particle theory.

The Chinese yin-yang symbol is probably the best-known duality sign. It represents opposite but interconnected forces that work together in support of life. Traditionally, yin is the receptive force, and yang is the active one.

The yin-yang philosophy also teaches that the universe was created out of “primary chaos” and organized itself in cycles of yin and yang to form matter and existence.

The first mention of the concept appeared around the 4th century.

The sun and moon are classic symbols of duality. In most traditions, the sun represents the masculine yang, and the moon denotes the feminine yin.

Various Hindu schools of thought regard the sun as a symbol of energy and the moon as one of peace.

The sun represents power, warmth, light, and work, while the moon is associated with calmness, beauty, mystery, and relaxation.

The Ouroboros — sometimes spelled uroboros — first appeared in ancient Egypt. A symbol of creation and destruction, it’s usually depicted as a snake or dragon eating its own tail, representing the endless cycle of life achieved through life and death.

You may not know the vesica piscis by name, but you probably recognize the Pythagorean symbol: two intersecting circles whose centers rest on the other’s perimeter. It’s also a type of camera lens.

Many people — across cultures — see the number two as the purest form of the duality concept. After all, it takes two forces to achieve balance.

Moreover, in Buddhism, the number two represents the duality of samsara and nirvana — or the earthly and heavenly realms.

The Chakana or Inca Cross is a perfectly symmetrical design originated by the Incas. It’s a multi-tiered cross with a perfect circle at its center.

The Chakana represented the Incan concept of Yanatin, which speaks to the idea of reciprocal energies ruling the world and creating life.

In the symbol’s early existence, its circle stood for Cusco, the capital and center of the Incan Empire. However, when Spanish conquistadors landed and the idea of Cusco being the center of the universe shattered, the circle became a theoretical representation of life’s center.

Two fish swimming in opposite directions to form a circle is another ancient symbol of dualism. Over the centuries, many religions have used it to represent opposing creation energies.

Other interpretations of the double fish include left and right brain hemispheres, mind and heart, and thoughts and emotions.

Known for their bravery and stalwart natures, magpies have long been acknowledged as a symbol of duality and reconciliation.

They earned their status primarily because of their black and white feathers, which are seen as a natural occurrence of duality.

Many Buddhist traditions, especially the Dvaita school of thought, view the Buddha as a symbol of balance and duality.

Even though the Buddha was an individual, according to the religion’s teachings, his enlightenment ascension meant he’d achieved a perfect balance of opposing forces.

Moreover, the Buddha is seen as both teacher and student, another dualistic pairing.

Sometimes spelled “ginko,” the gingko tree is one of the planet’s oldest species, first appearing about 290 million years ago.

Also called the maidenhair tree, the gingko is native to China and has long been seen as a symbol of dualistic forces working in union to survive through the planet’s long history.

Cousins to horses, zebras, and their iconic black and white stripes symbolize duality in several African cultures. The alternating stripes are seen as reminders of opposing forces that must be acknowledged and balanced to lead a good life.

Fascinatingly, no two zebras have the same exact pattern, and each animal has the same number of stripes in each color.

Janus was an ancient Roman god. Depicted with two visages facing in opposite directions, he was the deity that presided over the beginning and end of conflict — i.e., the god of war and peace. As such, Janus is considered a symbol of duality.

He was also a busy god who held sway over gates, transitions, duality, time, doorways, passages, and frames.

Trivia factoid: The month of January was named after Janus.

Serpents have played a role in human mythology since humans began congregating and organizing into groups. Traditionally, they represent the duality of males (when the snake is stretched out) and females (when it’s coiled).

Serpents also stand for the dualism of good and bad in scores of ancient stories.

Practically speaking, snake venom is poisonous but is also used as an antidote — another form of duality.

Also known as the Shri Chakra, the Sri Yantra comes from the Shri Vidya school of Hinduism. Design-wise, the symbol is a bunch of overlapping triangles converging on a central point.

Technically, the symbol represents the process of duality becoming oneness and vice versa.

Many people meditate on the Sri Yantra with the goal of better understanding the nature of harmony and balance between the mind, body, and spirit.

“Hunab Ku” means “The One God” in the ancient Mayan language, and it’s the name of a duality symbol from the culture. Also known as the “galactic butterfly,” the Hunab Ku is the Mayan version of the yin-yang symbol and represents universal balance.

As such, the symbol also represents duality converging into oneness or the transition from polytheism to monotheism.

There’s a unique species of snail that lives off the coasts of Thailand and New Zealand that has a neat shell featuring a “door” known as Shiva’s eye.

It looks like an eye within an eye and is associated with the Hindu god Shiva. Various cultures revere the shell as a symbol of duality. In chakra work, Shiva’s eyes are linked to the third-eye node, the gateway between the spiritual and physical realms.

The Celtic double spiral features two sides. The right coil starts on the inside and spins out clockwise. The left side turns counterclockwise and begins on the outside, rotating inward.

The design signifies universal balance and promotes the idea that everything starts and ends in a single source.

Ideas for Using These Symbols of Duality

How can you incorporate symbols of balance and duality into your life? We’ve got a few ideas.

Since humans’ earliest days, our species have understood the fundamental duality of existence. It’s an excellent concept to contemplate and internalize, and these symbols are reminders of the importance of a balanced life.