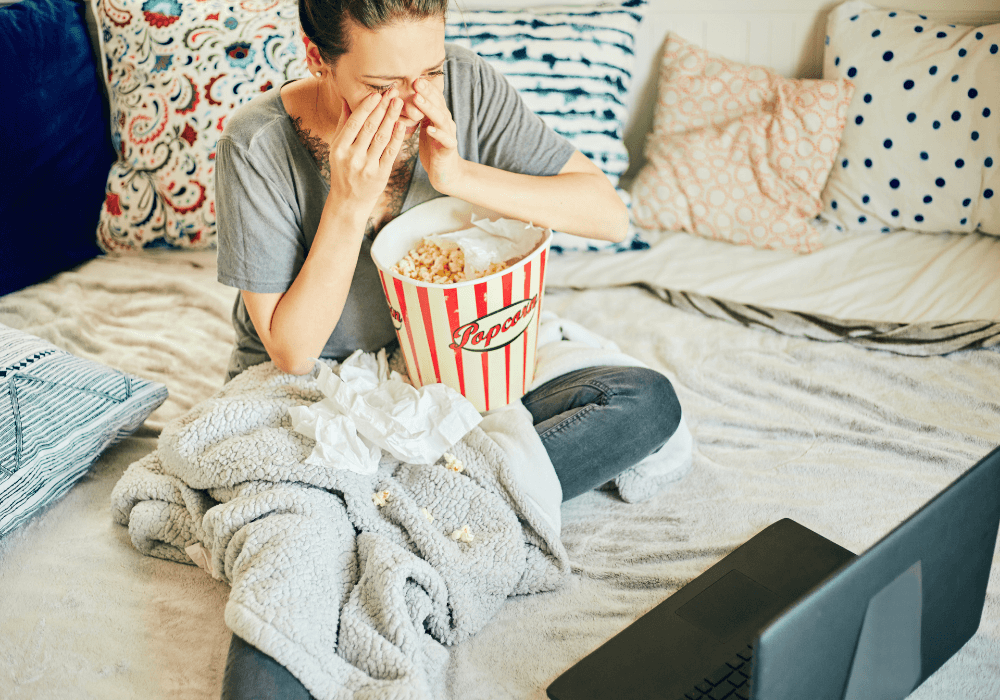 Some people get inspired by a higher power, person, idea, or place.

For others, it can be words that resonate with them — or an enlightening book they pick up.

Even a film can move you and change how you view the world.

The common element with all of these is that they touch the hidden places in our hearts and minds.

They speak to us personally and can trigger a soul-level awakening that profoundly alters our lives.

Spiritual awakening can be a mysterious and incredible experience.

But it can be challenging to make sense of new feelings and ideas as you encounter something both intangible and sacred.

To help you process these feelings, we’re sharing some spiritual awakening movies and documentaries that may speak to your experience or help you begin your journey.

What Is Spiritual Awakening?

Spiritual awakening is a phenomenon in which one’s awareness expands beyond the normal limits of perception. It’s also known as enlightenment or illumination.

You may feel you’ve transcended time and space. Your ego and sense of self dissolve as you recognize you’re part of something far more infinite.

This is an important concept to understand because it helps shape the way you look at your experiences as they occur during your spiritual journey.

If you feel like you have a deeper connection with nature, the Universe, and all sentient beings, you may be experiencing a spiritual awakening. It can occur gradually or spontaneously. You can decide on an intentional journey toward enlightenment, or it can happen unintentionally.

What Should I Watch for Spiritual Awakening?

Many good movies on spirituality are available to help you better understand this awakening.

If you ever watched a movie and experienced an “aha” moment when suddenly you realized the whole movie communicates a “secret” or profound idea you previously didn’t know, you’ve experienced an awakening.

Many of these movies offer different perspectives on life from people’s viewpoints in various situations.

Look for films that

If you are ready to embark on a journey of discovery and love movies and shows that provide thought-provoking content, plan to watch some of the films and documentaries listed here.

Each story is presented from the main character’s viewpoint and may evoke feelings that you have experienced and are curious about.

The Fountain is a 2006 drama film starring Hugh Jackman, Rachel Weisz, and Ellen Burstyn. The film is directed by Darren Aronofsky and written by Aronofsky and Ari Handel.

The plot follows a conquistador who travels through time to save his lover from her death as she succumbs to an incurable disease.

This film is an excellent example of an awakening movie because it shows how someone can have an awakening and still have a lot of confusion. Phenomenon also shows how people can react to the person who is awakened.

The main character in this film, played by John Travolta, has such a strong experience that he feels like he might be losing his mind. Eventually, he realizes that he was meant for something greater than just living on Earth.

He recognizes there is a reason for all the strange things happening to him and that he needs to embrace them rather than resist them.

A beautiful, uplifting film about a family living in Nazi-occupied Italy. The film is filled with humor, love, and hope as the father tries to protect his young son from the horrors of war.

He makes life in the concentration camp a game to keep his son from knowing they live in such terrifying conditions.

The story is based on a Jewish-Italian man named Rubino Romeo Salmoni, whose story is narrated through a young boy named Guido Orefice (the main character’s son).

The Truman Show stars Jim Carrey as Truman Burbank, an insurance salesman who discovers that his entire life has been filmed and televised without his knowledge by the world’s media.

He is blissfully unaware that his whole life has been directed and filmed in a studio. As he begins to suspect that he might not be real, he sets out on a journey to uncover his true identity.

This sci-fi film takes place in a world where people are controlled by their dreams. The main character wakes up from one dream into another, which gives him the freedom to explore what’s going on around him.

The main character, John Murdoch, awakens to the knowledge that he lives in a false reality. He realizes that his memory has been wiped and doesn’t know who he really is.

He finds himself in a strange city without understanding how he got there or how long he’s been there.

How To Practice A Centering Meditation To Overcome Overwhelm

This movie is a classic and one that had everyone questioning whether the world we live in is a simulation. It features a group of people freed from the matrix by Neo, who is the chosen one.

The matrix is a world in which machines force humans to live. The humans believe they live in reality, but the machines use them for batteries.

This film is a great example of how we can manipulate reality through technology and mind control techniques like hypnosis and NLP (neuro-linguistic programming).

Wake Up is a feature-length documentary film by Canadian director and producer Aaron Biebert. The film explores the concept of spiritual enlightenment, specifically as it relates to the state of consciousness known as “waking up” or “being awake.”

The film has been shown on TV worldwide, including on Netflix in over 190 countries and at major film festivals such as SXSW and Hot Docs. It was also nominated for Best Documentary Feature at the 2019 Academy Awards®.

Los Angeles filmmaker David Thomas attempts to explain spirit channeling, which involves a psychic connection with a spirit being, in his documentary, Tuning In.

The film unites six of North America’s most prominent channelers for a rare insight into the phenomenon, as well as the information these channelers receive.

In channeling, an individual in a trance state makes a psychic connection with a spirit being. The channeler can then act as a dimensional go-between bringing other humans in contact with the entity and interpreting messages from the entity.

The movie Awake the Yogananda movie (Netflix documentary) was released on April 30, 2019.

It’s a documentary about Paramahansa Yogananda, an Indian spiritual teacher who introduced millions of Americans and Europeans to the teachings of meditation, Kriya Yoga, and the principles of yoga in general.

David Lynch directs the film, and it tells us about Yogananda’s life story. We can see how he was born, how he grew up, and his experiences before becoming a guru.

Cloud Atlas is a 2012 film written and directed by Tom Tykwer, Andy Wachowski, and Lana Wachowski. The movie is based on the novel of the same name by David Mitchell.

The film tells six stories set in different eras, from the mid-19th century to a post-apocalyptic future.

Each story follows an individual who finds his life changed by a rebellion against a powerful company that controls everything from politics to technology to medicine.

Samsara is a documentary about life, death, and rebirth. It explores the cycle of reincarnation by following subjects who live in different parts of the world.

The film takes viewers to India, Thailand, Bali, and Nepal as they experience various rituals associated with death. It’s a powerful film that helps us understand how we can break free from our egos and learn to embrace death as an essential part of life.

Can Watching a Movie Be a Spiritual Exercise?

Of course, it can, and here is why: If you watch with an open mind and heart, allowing yourself to see beyond the surface of the story and characters, and to be changed by what you see on screen, then yes — it can be a compelling experience indeed.

Watching a film with a spiritual dimension is like practicing mindfulness or meditation. You pay attention to the moment without judging it.

You let yourself feel whatever comes up without resisting. In this way, you are in the perfect mindset to experience an awakening – or at least to begin the journey.