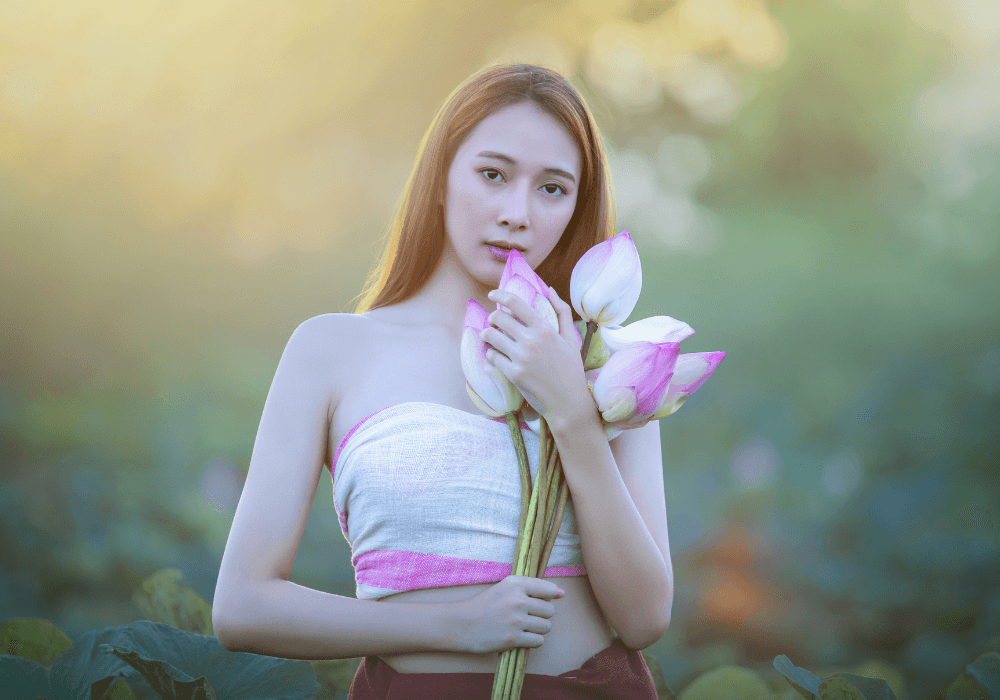 Homo sapiens have communicated via symbols for over 200,000.

Practically speaking, symbols serve myriad purposes — from commerce signage to warning signals — and play a massive role in how people absorb and express their identities within a cultural framework.

Feminine symbols of strength and womanhood have long been a part of cultural traditions.

What’s In This Article?
[show]

What Symbolizes Strength for a Woman?

In the next section, we’ll look at symbols representing womanhood through the millennia.

But first, let’s quickly review what symbolizes female strength in a more socio-esoteric sense. In other words, what are the things that may come to mind when we’re asked to describe the strength of women?

But perhaps the best quote that encapsulates womanhood is about Ginger Rogers, who “did everything” Fred Astaire did but “backwards and in heels.”

Why Are Symbols of Female Strength Important?

Communication is integral to our species’ survival, and symbology is a fundamental pillar of written conversation.

Since the dawn of primitive civilization, humans have used sigils, signs, and symbols to form communities, cooperatively harvest crops, and send warnings. As such, they provide insight into socio-cultural attributes, customs, and values.

From a more emotional and spiritual standpoint, symbols of female strength can be important for people looking to build a stronger bond with the divine feminine.

Ladies working on increasing their self-awareness and self-confidence may also find comfort in female symbols of strength and courage.

What symbols represent the strength and courage imbued in womanhood? There are many, and we’ve curated a list of our 15 favorites.

Revered as sacred in certain Buddhist and Hindu traditions, elephants have long been idolized as majestic and strong. The giant pachyderms are also a symbol of womanhood worldwide.

Known for their epic mothering, incredible intuition, loyalty, and impressive memories, elephants rank among the most intelligent and sensitive species on Earth.

Moreover, women rule the roost in the land of Elephants, and humans have subsequently seen the species as a symbol of feminine wisdom.

Durga is a popular Hindu goddess that many women look to for strength, comfort, protection, and guidance. The six-armed deity is also revered as a superstar when it comes to drawing boundaries.

If you want to promote feminine strength and energy in your home, a bust, statute, or painting of Durga may be the way to go.

If you want to honor Durga with a tattoo, art, or jewelry, you have two options: a depiction of her face or her trident.

Most people see an ichthys and immediately think, “Jesus fish.”

But before the well-known pictograph was associated with Christianity, it was a common symbol used to represent womanhood and female power.

A sigil tied to Aphrodite, Artemis, and several Syrian goddesses, the vesica piscis was widely used and appeared in carvings and paintings dating back to prehistoric times.

In fact, one of the reasons early Christians used it was because it was well known and wouldn’t stand out.

Crescentia cujetes — aka calabashes — are large gourds native to western and southern Africa. As one of the first crops harvested by homo sapiens, calabashes became an integral part of life in early Africa and Asia.

Not only were they grown for sustenance, but women developed several ways to use the gourd’s outer rind.

They would scoop out the food and then dry out the rest, which became very hard. Once “baked,” women used them to cook, carry water, and sell things at the local market.

Women even used them to craft instruments and fine art.

Over the centuries, due to the numerous ways in which calabash is used, it has become a symbol of female ingenuity in African countries.

If you’ve ever been to a yoga studio, retreat, or new-age jewelry store, you’ve probably seen an unalome. It represents the journey to enlightenment and is a common symbol in various Buddhist traditions.

Instead of a straight line, the unalome has a meandering path to symbolize life’s ebbs and flows, ups and downs.

Lada — also known as Lelja and Ladana — is a figure that pops up in some Polish and Slavic mythologies.

Paired with her twin brother, Lado, Lada was a cosmic female force associated with spring, fertility, harvests, women, children, love, and desire. She also protected people against negativity and darkness.

For decades, Lada was seen as a historical figure, but researchers debunked the notion decades ago.

These days, most early European scholars believe that Lada may have been an invention of the church in the 1400s as a way to denigrate pagan culture and promote Christianity.

Regardless, Lada is still a symbol of female strength and empowerment in many European nations. People typically associate her with the star of Lada.

The universal symbol for “female” is the venus symbol: a circle with a cross protruding from the bottom.

Before modern usage, it was the sigil of the Roman goddess Venus — which became the Greek goddess Aphrodite.

7 Mindful And Meditative Drawing Ideas For Relaxation and Calm

7 Of The Best Tibetan Singing Bowls For Mindfulness

Nu (女) is Mandarin Chinese for “woman.” The character looks like a woman crossing her legs.

Due to the lowered status of women in ancient Chinese culture, “nu” is used in many negative words.

However, in recent decades, there has been a movement to reclaim the character, and now many females see it as a symbol of womanhood — specifically, females’ ability to persevere through hardship.

Feathers and ferns represent womanhood in many cultures in both Europe and the Americas. Most First Nation communities regard feathers as a feminine symbol representing trust, freedom, strength, and wisdom.

Ferns are an ever-present motif in Celtic, northern European, and African traditions.

What’s fiercer than a lion?

You got it: a lioness.

The lady cats run Lion prides. Craig Packer, director of the Lion Research Center at the University of Minnesota, explained to National Geographic that “females are the core [of the lion social structure].

The heart and soul of the pride. The males come and go.”

Lionesses care for the kids, define their family’s territory, protect against predators, and hunt. They’re talented females that have become a universal symbol of sisterhood, unity, and divine feminine energy.

According to Egyptian mythology, Hathor is one of the oldest deities known to man, and her primary responsibility is rotating the cosmos daily.

Daughter of the Sun God Ra, Hathor’s sigil is two cow horns with a sun in the middle. If you’re a woman in search of cosmic protection and psychological well-being, Hathor is the Egyptian goddess to call upon.

Mokosh hails from Eastern European folklore and traditions. Known as “the great sufferer,” Mokosh represented life, death, and fertility and served as the protector of women’s work.

A popular figure among naturalists, Moksosh is often associated with herbalism and medicine.

Want an excuse to have the ladies over? Friday is Mokosh’s day of the week, and she loves when people get together to send her well wishes. Who knows, she may even reward you for doing so.

Lotus flowers are a prominent symbol in Asian art and can represent several things and concepts.

In ancient times, women would signal their sexual status by associating with a lotus bud (a female virgin) or a fully blossomed bloom, signaling that a woman was married or “deflowered.”

Today, tools for publicly designating a woman’s sexual experience have, thankfully, gone the way of the girdle, and lotus flower symbolism is more general.

However, in many circles, it still stands for the beauty and spirituality of womanhood.

Swans aren’t an official symbol of womanhood in religious traditions, but they have come to represent traditional feminine energy over the past several decades.

Elegant and beautiful, swans embody the qualities of traditional womanhood, which many women find comforting and empowering.

Notably, several First Nation communities in North America associate swans with the sky and spirituality but not necessarily women.

The moon and women have gone hand in hand for millennia. In ancient pagan traditions, moon phases were thought to be controlled by goddesses. The association stuck; today, female energy is connected to moon symbology.

The triquetra — aka the triple moon — is probably the most famous woman-moon symbol. It depicts three lunar stages — waning, full, and waxing — and appears in various cultural traditions.

Some see it as the maiden, motherhood or maturity, and crone; others regard the triquetra as a representation of intuition, power, and creativity; still, others believe the triple moon sign is a universal sigil for birth, rebirth, and death.

Today, the triquetra remains a prominent symbol in the Wiccan tradition.

How to Use These Female Power Symbols

How can you use female power symbols? How can you mindfully and meaningfully incorporate them into your life?

We hope you found our list of female strength and courage symbols helpful and interesting. Celebrating the feminine divine can be a powerful experience — for both men and women.

So why not give it a try? Either nothing changes, or you find it a source of strength. And we certainly hope it’s the latter.