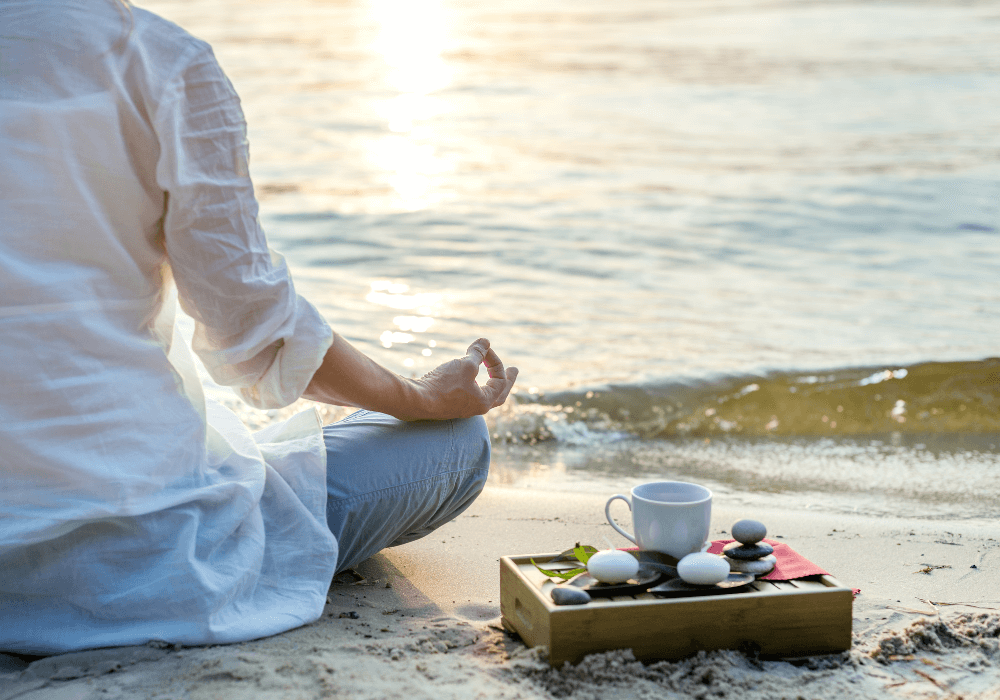 There is a lot of buzz around Transcendental Meditation (TM) and mindfulness.

They are both popular methods of relaxation, stress relief, and spiritual development that have branched off from ancient traditions.

While they share some similarities, there are also some important distinctions.

But which one is right for you?

In this blog post, we will discuss the key differences between Transcendental Meditation and mindfulness, so you can decide how each practice may be valuable in your life.

Is Transcendental Meditation the Same As Mindfulness?

While transcendental meditation isn’t the same thing as mindfulness, the two practices have many similarities.

They both require the practitioner to go inward and become aware of their thoughts, feelings, and the present moment by slowing down and engaging in a degree of stillness.

Both of these practices almost always involve some form of meditation. But they can also be as simple as focusing your attention on your breath or a specific mantra.

This singular focus allows for the practitioner to slowly shut out the external world and instead focus on the internal workings of reality.

Both practices aim to make you aware of your thoughts and feelings without judgment. You’re not trying to push away any negative thoughts or emotions.

You’re simply acknowledging them and letting them go. This skill is cultivated over time and ultimately leads to a more peaceful and calm state of mind.

All practices of mindfulness and TM originate from ancient eastern traditions, but mindfulness has been secularized in recent years and is now practiced by people of all religions.

Both mindfulness and transcendental meditation are embraced by a wide variety of people, including celebrities, CEOs, and even sports and military personnel.

Some benefits of these two practices include:

These are just a few of the many benefits people who practice mindfulness or transcendental meditation have reported.

Is TM Better Than Other Meditation?

To decide if TM is better than other forms of meditation, you need to understand each practice. So what is TM meditation?

Transcendental Meditation is a specific form of mantra meditation developed by Maharishi Mahesh Yogi in the 1950s. It’s considered one of the simplest and most effective forms of meditation, which is why it’s become so popular in recent years.

No type of meditation is ultimately better than another. There are only certain practices that may be relevant to you.

Many people enjoy TM mediation if they’re looking for a straightforward and accessible approach to meditation. But this may not meet everyone’s needs.

If you have a more spiritual or religious practice or want physical or creative benefits from your practice, you may prefer another form of meditation.

There are many different types of meditation, so it’s important to experiment and find the one that works best for you.

Although Transcendental Meditation (TM) and mindfulness have many similarities, there are also some key differences.

These differences may make one practice more appealing to you than the other.

Here are nine essential differences to understand between TM vs. mindfulness:

While it’s impossible to work with the mind without acknowledging thoughts, some forms of mindfulness invite people to observe their thoughts without attachment more than TM does.

2. TM Is a Modern Form of Mindfulness

Mindfulness has been around for centuries, but TM is a much more recent practice. It was developed by Maharishi Mahesh Yogi in the 1950s as a form of mantra meditation and is a modernized spin on a Hindu practice.

This means that TM meditation is more on-trend than other types of mindfulness, which is revealed in its popularity among celebrities and CEOs. Some notable TM practitioners include Oprah Winfrey, Jerry Seinfeld, and Hugh Jackman.

Mindfulness, in general, evolved out of Buddhist traditions but has become more secular and modernized in recent years as well.

3. TM Is a Secular Practice

Transcendental meditation is a secular practice, which means it’s not tied to any one religion in its practice. It isn’t held in a religious institution. This makes it more accessible to people of all faiths and backgrounds.

TM centers throughout the country and world invite people of all religions to learn the practice.

On the other hand, mindfulness has its roots in spiritual and religious practices. However, there is a growing movement to secularize mindfulness and make it accessible to everyone.

Most people will feel comfortable practicing in a temple or at home, no matter their religion. However, it is still primarily a spiritual practice, and each branch of mindfulness comes with specific tenants and belief systems.

Mantras are one of the essential aspects of TM. A mantra is a word or phrase that is repeated during meditation. The mantra is a tool to help you focus and transcend the thinking mind.

A certified teacher gives most people who practice TM a specific mantra. The mantra is personal and should not be shared with anyone else.

Mindfulness may or may not use mantras as an anchor for the practice. Some mindfulness practices use affirmations or positive statements as a form of mantra, while others don’t use them at all.

7 Simple Ways To Unblock Each Of Your Chakras

Are You Truly Self-Aware? 13 Signs You Are Lacking Self-Awareness

Mindfulness is an active practice that requires effort and concentration. You must be constantly aware of your thoughts, feelings, and surroundings to practice mindfulness effectively.

This effort can be difficult for some people, especially if they’re new to meditation or have a lot of distractions in their lives.

TM is a more passive form of meditation. The goal is to let go of thoughts and allow the mind to be still, which can be easier for some people. But it’s important to note that achieving results still takes effort and practice.

Transcendental Meditation is a trademarked practice, which means there are specific requirements for how it’s taught and practiced. To be a certified TM teacher, you must go through an accredited program.

This ensures that the practice is taught correctly and consistently. It also allows the Maharishi Foundation to protect its intellectual property. But there are fewer certified TM teachers than there are mindfulness instructors.

Mindfulness is not trademarked, so anyone can teach it, making it more accessible but also less consistent. It’s valuable to do your research when choosing a mindfulness instructor or program to make sure they’re qualified and reputable.

7. Mindfulness Focuses on Awareness of the Body

One of the main goals of mindfulness is to develop a deeper awareness of the body. This includes sensations, emotions, and movement. You will often scan your body during mindfulness meditation to check in with how you’re feeling.

TM also involves body awareness, but it’s not the main focus. The goal is to transcend the thinking mind and reach a state of pure consciousness.

This doesn’t necessarily involve focusing on the body, but some TM practitioners do report increased body awareness after years of practice.

When practicing TM, you’re encouraged to find a quiet place where you won’t be disturbed. This could be a room in your house, a spot in nature, or anywhere else that’s free from distractions.

Mindfulness also involves shutting out the external world, but only to a certain extent. You’re still aware of your surroundings, but you’re not letting them distract you from your meditation.

For example, walking meditation might involve focusing on your breath and the sensation of your feet hitting the ground while also being aware of the sounds and smells around you.

9. TM is More Expensive Than Mindfulness

Because TM is a trademarked practice, it can be more expensive to learn. The cost of a TM course typically includes the price of the materials and the fees for the certified instructor.

Mindfulness courses are often less expensive because there’s no need to pay for materials or certification. You can also find many free mindfulness resources online or through non-profit organizations.

The key is to find the practice that works best for you. The right practice is the one that you can stick with, and that feels good for you. Once you choose a practice, be patient and consistent with it. The rewards will come in time!